How to fix a leaky prostate 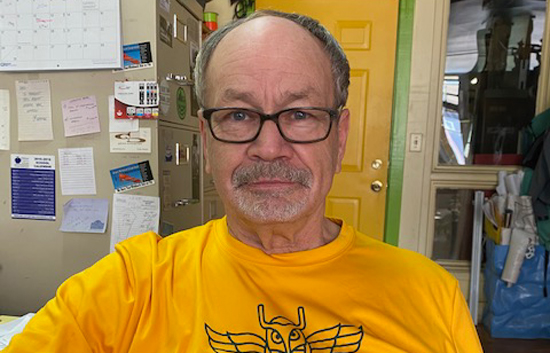 Drip, drip, drip. It's a sound Les Bruning learned to hate. It kept him up at night. It kept his wife up too. It began to control his life.

"I was conscious of it 24 hours a day," Bruning says. "We were both exhausted. It was impeding my lifestyle."

Bruning experienced many of the symptoms common with this condition: a feeling like he had to urinate all of the time but could never completely empty his bladder, getting up at night to urinate, pain from the pressure against his urethra, a weak or slow urinary stream that for Bruning, eventually turned into a slow drip, drip, drip.

Today, Bruning is living drip-free thanks to a new procedure being offered at Nebraska Medical Center called prostate artery embolization. Prostate artery embolization is an outpatient, minimally invasive procedure that involves blocking the blood vessels that feed your prostate to reduce its blood supply. It allows the prostate to shrink, relieving and improving symptoms. The procedure is performed by inserting a catheter into an artery through the wrist or groin. The catheter is then guided into the vessels that supply blood to the prostate. Tiny particles are injected into the catheter, decreasing blood supply to the prostate.

"Prostate artery embolization is a less invasive alternative for patients who are not surgical candidates or for those who are not interested in other surgical procedures commonly performed for this condition such as transurethral resection of the prostate (TURP) and photoselective vaporization of the prostate (PVP)," says Joseph McBride, MD, Nebraska Medicine interventional radiologist.

Bruning, now 72, began to experience symptoms nearly 20 years ago. He went from one urologist to the next, trying different medications and therapies. They would work for a while, but then the symptoms would return. He tried changing his diet, drinking less water, but nothing seemed to work. "I was always waiting for the next thing to come around that might help me," says Bruning.

At the end of his rope, Bruning decided to have a prostate artery embolization procedure in the fall of 2019 at a medical center in Virginia. At the time, it was one of the few centers offering the procedure. "I never thought I'd fly across the country to have a procedure done, but I had reached my limit," recalls Bruning. "It was hard to go out. I hated being in public places. I was always looking for bathrooms in every conceivable place. It had also become very painful. I wanted to have a better life. I looked at the other procedures, but I was concerned that the side effects might be worse than the problem."

After his first embolization procedure, Bruning noticed a big improvement in his symptoms for the first six months. The next six months, his symptoms plateaued, and then they gradually began to return.

"It was very frustrating," Bruning says, who immediately resumed his search for other solutions. That's when he learned that Dr. McBride was performing the prostate artery embolization at Nebraska Medical Center.

"I met with Dr. McBride and was very confident in his abilities," he explains. "He was open, honest and very informative."

"While the goal is for the procedure to be long-lasting, it is not uncommon to repeat the procedure in more advanced cases. We're finding that about 25% of patients need to have a second procedure. In Leslie's case, I was a bit more aggressive the second time to achieve a greater restriction of blood flow to the prostate."

"My symptoms immediately disappeared," Bruning says. "I feel even better than I did after the first procedure."

"The embolization procedure is not completely free of complications, but side effects tend to be less with this procedure," notes Dr. McBride. "Studies show this procedure has a high rate of success, significantly improves the frequency of nighttime urination and may have a favorable impact on sexual function. Now Les probably has fewer urinary symptoms than most men his age."

Bruning, a retired art professor at Bellevue University and a nationally recognized sculpture artist, says he can now focus more intently on three of his favorite hobbies: his artwork, his 17 grandchildren and three great-grandchildren, and bicycling, without the constant interruption of having to relieve himself. Says Bruning, "I literally feel like I have a new lease on life. And my wife is very happy too!"

Having frequent urination problems?
Call us at 800.922.0000 to schedule an appointment with one of our specialists.

Lanny Warren's prostate biopsy at another hospital showed he didn't have cancer. But for some reason, Lanny didn't feel right about that diagnosis and got a second opinion with Dr

How much do you know about the prostate? For some men, an honest answer may be “not much.” Here we discuss the basics, including how a healthy lifestyle can promote better prostate health and overall quality of life.

See what you need to know about colonoscopies and prostate exams in this infographic.