Get health information you can use, fact-checked by Nebraska Medicine experts

Looking for the differences between LASIK (laser-assisted in-situ keratomileusis) surgery and SMILE (small incision lenticule extraction)? SMILE is the latest vision correction surgery and the most recently approved. This is Joe Evans' story of choosing between the two techniques for better vision.

Evans had worn glasses since he was 6 years old. In junior high, he started wearing contacts. Without glasses or contacts, he was extremely near-sighted. "His vision before SMILE was worse than 20/400 (seeing the big 'E') at the end of the room," says ophthalmologist Ronald Krueger, MD. Evans also had some astigmatism in his right eye. 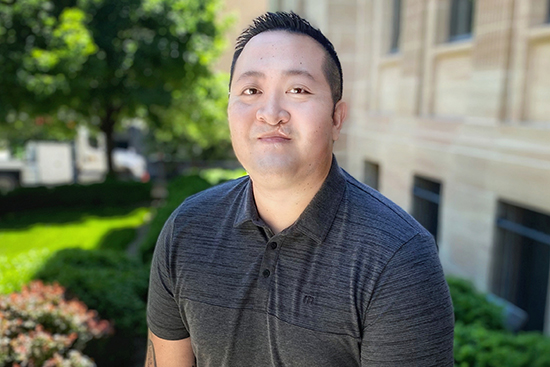 Evans says he was interested in getting vision correction after hearing friends rave about it. "I've always thought about LASIK. I've heard from friends and other people who had gone through it and said it was the best decision of their lives."

Evans was the first Nebraska Medicine patient to get SMILE surgery. He wasn't worried about being first, saying, "Dr. Krueger has been doing refractive surgery for decades." Dr. Krueger has also been involved in laser vision correction research for more than 35 years and recently won the Lifetime Achievement Award from the International Society of Refractive Surgery. 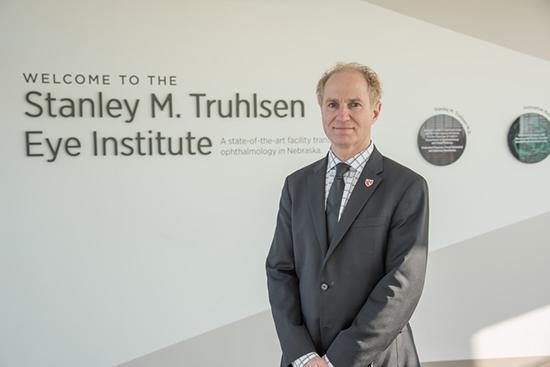 Here Dr. Krueger explains the differences between the two surgeries.

The main difference between the two techniques is how large of an incision is made. LASIK creates a 300+ degree circular flap incision, while SMILE creates a smaller 60 degree incision into a pocket underlying a cap of tissue. It's still tissue removal, just in a slightly different way. Instead of the laser disintegrating the tissue (like LASIK does), the laser precisely carves out a layer of tissue that needs to be removed. Then that little bit of tissue is pulled out through the cap incision, like pulling thread through a keyhole.

The single laser in SMILE creates the exact shape of what that lens is – front and back surfaces. It's separated internally with the same laser, then pulled out of the cap incision.

Both LASIK and SMILE are painless procedures. The numbing eye drops worked perfectly, so all Evans felt was a little pressure – no pain.

After SMILE, the front of the cornea is a little stronger than after LASIK. "There are more supportive anchoring fibers in SMILE," says Dr. Krueger. "That affected Joe's decision a little bit."

There's also less of a risk of trauma. A LASIK flap typically heals over with no issues. But that flap can move when notably traumatized, even months or years later. With a SMILE cap, because it's anchored all the way around, the cap won't shift or move.

"SMILE is less externally invasive," says Dr. Krueger. "It's like a laparoscopic LASIK."

"A smaller incision is better for patients prone to dry eyes because fewer nerves are cut," says Dr. Krueger. "The LASIK procedure requires more nerves to be cut."

LASIK has a slightly faster recovery because the whole flap drapes right back over the surface. It conforms nicely to the surface that's created. With SMILE, the two surfaces need time to come together and get seated in right.

"In the case of Joe, he was seeing 20/25 the first day after surgery. Which is great – it's almost 20/20. But in some SMILE cases, it takes that first week for the vision to sharpen up a bit. SMILE also corrected astigmatism in Joe's right eye," says Dr. Krueger.

Two days after the surgery, Evans says, "Right now, my vision is as good as when I had contacts in, so I'm interested to see if it will continue to sharpen or improve in the coming days and weeks."

After either procedure, you use artificial tears to keep your eyes hydrated. A topical steroid drop reduces inflammation. And an antibiotic prevents any kind of infection that might happen otherwise.

At Truhlsen Eye Institute, you'll receive personalized care from expert providers who perform thousands of refractive surgeries every year. Based on your measurements, extensive tests and our decades of expertise, we'll help you decide on the best type of vision correction for you.

Ready to explore your vision correction options?
Call 402.559.2020 for a free screening today.

LASIK: 7 reasons it might not be for you, plus 3 alternative procedures

How LASIK surgery is done

Is LASIK Surgery Right for You?

By signing up, you are consenting to receive electronic messages from Nebraska Medicine.

Who's eligible for a COVID-19 booster shot?

One visit, two shots: COVID-19 and flu vaccines can be taken together

What are symptoms of AFib?